How We Received the Words of Jesus

Jesus wasn't an American who lived in the 21st century and spoke native English to his audience. He wasn't a Christian and didn't attend a church every Sunday. Based on what we know from the Synoptic Gospels, Jesus was a Jew who lived in the 1st century, spoke Hebrew and Aramaic, practiced Judaism, attended a synagogue every Shabbat and engaged in rituals at the Jerusalem Temple. This is very important information to know when our goal is to linguistically understand the words of Jesus.

In the previous blog I introduced the linguistic model we use at the Biblical Heritage Center to determine the meanings of the words of our Bibles. Words originate from a Source (author/speaker) and they are passed on to one or more Receptors (readers/hearers). 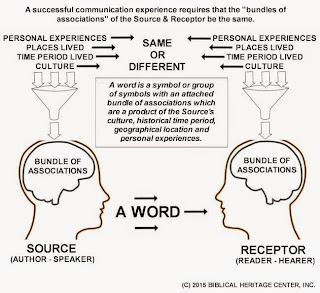 Our goal is to determine what the words meant to the original Sources.

How did the words of Jesus travel across 2,000 years and make it to us?

It is important to understand that in the communications process, people often wear two hats -- Source & Receptor. When we are working to understand the meanings of the words of our Bibles we must do our best to identify all of the people involved in the transmission chain and factor their lives into the process. It is clear that their cultures, time periods, geographical locations, and personal experiences factor into the messages that send to the next Receptor -- just as yours does when you explain what the words of Jesus mean.

(1) Jesus didn't write down his messages, he spoke them to followers.

(2) The earliest accounts of Jesus's words were made by his followers.

(4) English translators chose which copies of the manuscripts of the scribes they would translate.

(5) The translators made their translations.

(6) Readers determine what the words of the translators mean based on what's in their minds.
For the past five hundred years people have been reading the Bible without understand the linguistic laws that govern the human mind. The result has been that hundreds of different translations of the Bible are in circulation and literally thousands of Christian denominations have been created through conflicts over what the words of our Bibles mean. We can change things by simply asking the simple question above and working to find the answers:

What did the words mean to the original Sources?

PS -- If you like this please let me know by “Liking” BHC on Facebook by clicking here.