A New Way to Talk About the Elephants in the Room 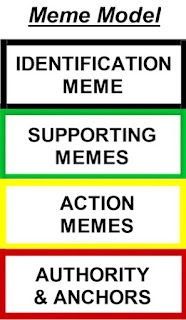 Christianity and Judaism are mutually exclusive monotheistic religions, which means a person cannot belong to both religions at the same time. In addition to that, some Christian and Jewish religious institutions do not agree about what important beliefs mean within their own religions. Those “polarizing beliefs” are “the elephants in the room” – beliefs that most people usually avoid talking about.

However, there is another reason that people ignore these “elephants.” They are “Institutional Truths” (see my previous email for more info about this), which means they are backed by the authority of powerful institutions.

Challenges to an Institutional Truth is viewed as a direct challenge

to the institution’s claim that it is an authorized representative of God!

For most people, emotions are much more involved in belief discussions than logic or reason. That is another reason people choose to “ignore the elephants.” The bottom line is people have not had “a peaceful way” to talk about conflicting beliefs.

I created the Meme Model to make belief discussions more transparent -- a new way “to see beliefs.” “Memes” are “pieces of information” in neural circuits of the brain and all beliefs are memes. Institutional Truths are complex meme structures constructed of four types of information.

● Supporting Memes – Names of things related to the Identity Meme.

Below are Meme Models for stories I have discussed in previous emails.

The Creator of the Heavens and Earth in Enuma Elish

● Action Memes: Rules over other Gods ○ Uses Violence to Create and Rule ○ Actions driven by complaints of Gods

● Action Memes: Creates through speech and acts that are TOV ○ Follows a plan and creates in an orderly way ○ Values human life ○ Created humans in Its Image ○ Empowers humans to be Its representatives and exercise power as Co-Shepherds over all life on Earth.

● Action Memes: Created a man from dust of the ground ○ Planter of a garden in Eden ○ Giver of a commandment ○ Maker of animals ○ Maker of a woman from the rib of the man ○ Judge of human actions

Three models created from information of three different stories. Differences in the models were used to teach ancient Jewish audiences important lessons about their God, themselves, and their relationships to each other. Meme Models may be used to create transparency in any Institutional Truth – religious, political, or economic! Meme Models will soon become some of your most valuable possessions.

Thank you for reading this and please share it with others.

☼ Donate and help us fund our work! Click Here to Donate.