Guard Justice: Do Acts of MISHPAT 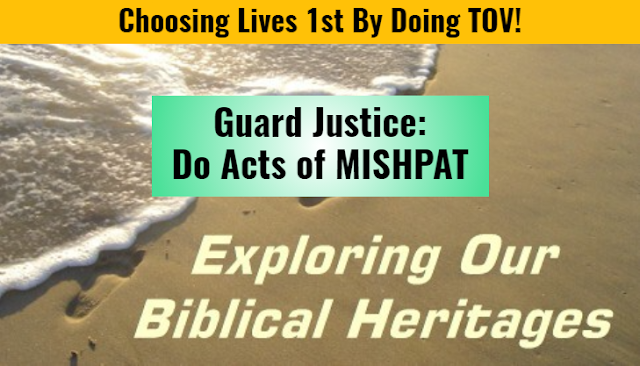 In my email Nations Will Guard the Way of Yahweh With Abraham’s Sons I discussed Genesis 18:19:

For I have noticed and observed him,

in order that he may instruct his children and his house after him,

that they guard the way of Yahweh,

to do TZEDAQAH and MISHPAT;

in order that Yahweh may bring upon Abraham

that which He has spoken concerning him.”

God chose Abraham because of, and because he will, do this.

by doing acts of TZEDAQAH and MISHPAT (justice).

That is the first time the word MISHPAT (justice) appears in the Bible. From this point on, TZEDAQAH and MISHPAT will appear together many times. The “Way of God” requires learning and doing both TZEDAQAH and MISHPAT, not just one. The prophet Jeremiah delivers a very similar message (9:23-24):

That he understands and knows Me,
That I am Yahweh doing

CHESED, MISHPAT, TZEDAQAH in the earth.
For in these I take pleasure in,” says Yahweh.

MISHPAT is a very ancient word, and it is one of those Hebrew words that using one English word to translate it doesn’t accurately reveal its meaning. Two English words, however, lay the foundation for understanding it – judge and govern. MISHPAT is used to describe “a justly ordered society,” which is also one of the foundational values of Judaism. The prophets railed against the absence of MISHPAT in the days of kings who abused their power.[1]

The rabbis repeatedly extol the society whose courts insist on justice and whose officials enforce justice to protect human rights. Imperfect justice was preferred to no justice at all. Jews were exhorted to accept the overly harsh laws of the Romans rather than to live under a government without laws.

And you have made men as the fishes of the sea,

as the creeping things that have no ruler over them.

Why were people compared to the fishes of the sea?

Because in the case of the fishes of the sea,

the larger one swallows the smaller one;

were it not for the fear of government,

the stronger would swallow the weaker.

When a judge renders a decision in accordance with the law of the Torah he is imitating one of God’s attributes -- God is just. Therefore, the judge should not waver in his execution of justice, especially when two litigants come before him.

An act of mercy to one party may be an act of injustice to the other.

Those who come before the judge are expected to imitate the other attribute of God — His mercy. People are required to go beyond the line of strict justice and to live in accordance with those greater ideals that the court cannot enforce – CHESED and TZEDAQAH.

In his relations with his fellow man,

a person should be guided by compassion and trust

rather than by the literalness of justice.

Exodus 21:1-24:8 is called “Mishpatim” and it lays down basic civil law, including rules of damages, torts and ethical obligations to help the needy, and includes agricultural laws and rules about festivals. It represents the transition from the Tribes of Israel into the Nation of Israel in the Jewish Scriptures.

Today, mishpat is the modern Hebrew word for law. A mishpatan is a lawyer. The Israeli civil courts are called batei mishpat lshalom – “courts for making peace between people.” Mishpat Ivri is the name for those areas of traditional Jewish law that can be applied to the areas usually covered by secular legal systems. Mishpat Ivri has standing in Israeli courts today.[2]

CHESED, TZEDAQAH and MISPHAT are the pillars of the message and movement of the Jewish Jesus. They are primary belief models and core values of our Biblical Heritages. I will discuss CHESED in the next email.