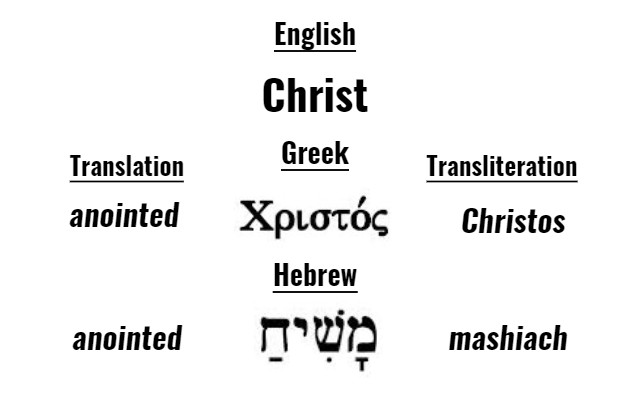 We used the Septuagint, a Greek translation of the Jewish Hebrew Scriptures, to find verses in it with Greek words related to “Christos.” Then, we went to the Hebrew Bible and found those verses and were able to locate the corresponding Hebrew words. In the graphic above you can see the Hebrew word behind the word “Christos.” It is transliterated “mashiach” and translated “anointed.” “Christos” and “mashiach” are both translated into English as “anointed.”

Our next project was discovering what “mashiach” meant in the first century CE Jewish culture in which the Jesus Movement took place. The “anointing” of persons and objects was a widespread ritual in ancient Israel. It played a central role in the ceremonies in which kings were inaugurated and high priests were consecrated. The ultimate source of the anointment was God. Those who were anointed acquired the title “Mashiach” ("Anointed One").

Anointing conferred the "Spirit of Yahweh" only upon kings. The king received Yahweh’s support, strength, and wisdom. The anointment of high priests conferred neither the Spirit of Yahweh nor any other divine attribute on them because they had different functions. Other concepts related to the title “Anointed One” appear in the Second Temple Period.

● The “Anointed One” will be a great political leader descended from King David. (Jeremiah 23:5)

● The “Anointed One” will be well-versed in Jewish law and observant of its commandments (Isaiah 11:2-5).

● The “Anointed One” a charismatic leader, inspiring others to follow his example; a great military leader, who will win battles for Israel; a great judge who makes righteous and just decisions (Jeremiah 33:15).

● The “Anointed One” will appear at the End of Days when God judges all mankind.

Now we can update the first two words from Mark 1:1 -- “Jesus Christ Son of God” to reflect the information we gathered above. Instead of calling him Jesus Christ, we should call him:

Jesus the Anointed One

This allows us to view him the role he saw himself, and the way people saw him. In first century CE Judea and Galilee, when people heard the words “Jesus the Anointed One,” two questions would have immediately popped into their minds:

● What was Jesus anointed to do?

● When was he anointed?

Those questions will be answered in my next email. Thank you for exploring biblical heritages with me.

● Donate and to Help Fund These Emails -- Click Here.